Here are some more images for a geologist to enjoy, or even better, to explain to me. We took some steps down to the beach on Olle trail 7 with the school hiking club yesterday and this is what the cliff behind the beach looked like.

The basic structure is a set of columns, just like Northern Ireland’s Giant’s Causeway and various other places around the coast of Jeju. Wikipedia says that the structure is due to the rapid cooling of lava, causing the lava to shrink and vertical cracks to propagate. There are also areas with deep pock-marks; is that the result of air pockets in the lava, or different minerals being eroded from the cliff after they were formed, or some other reason? I can only guess.

It’s pretty misleading to use the word ‘beach’ here. It was just an area of large boulders of all shapes and sizes, like the one in the photo below, each with it’s own set of bumps and cracks and indentations.

It looks remarkable, but this seems to be just one more piece of Jeju coastline of no special note, and which you may come across just by chance. Nowhere does it say ‘come and look at this’. 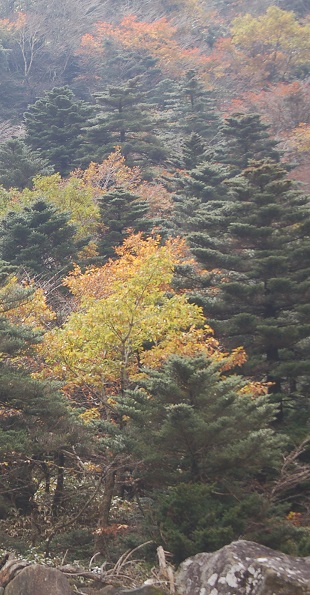