The last time I saw a football match was when I watched Yokohama F Marinos play out a 0-0 draw on a wet Yokohama night. Last night I watched Jeju United play Jeonbuk in the K-League in the World Cup Stadium in Seogwipo. There is a link: Both stadiums held matches in the 2002 World Cup, hosted jointly by Japan and South Korea. 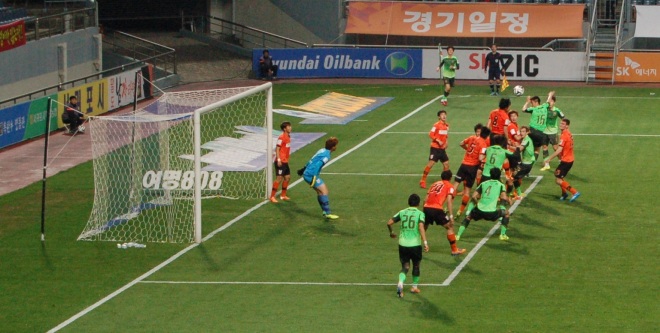 Neither side had any clear cut chances in the first half and with the score standing at 0-0 at half time, another goalless draw was a distinct possibility. It wasn’t to be, with Jeju United, in the orange strip, scoring two second-half goals to give the 2300 or so crowd something to cheer.

That puts United in third place in the league, on equal points with the two teams above them, Ulsan Hyundai and Pohang Steelers.